Hundreds of independent schools left in dire financial straits by the coronavirus pandemic are being targeted by Chinese investors, The Mail on Sunday can reveal.

Experts anticipate a ‘feeding frenzy’ as firms, including some run by high-ranking members of the ruling Chinese Communist Party, seek to expand their influence over Britain’s education system.

Seventeen schools are already owned by Chinese companies, but that number is set to rocket. Amid rising concern about Beijing’s tentacles reaching into British classrooms, an investigation by this newspaper can reveal: 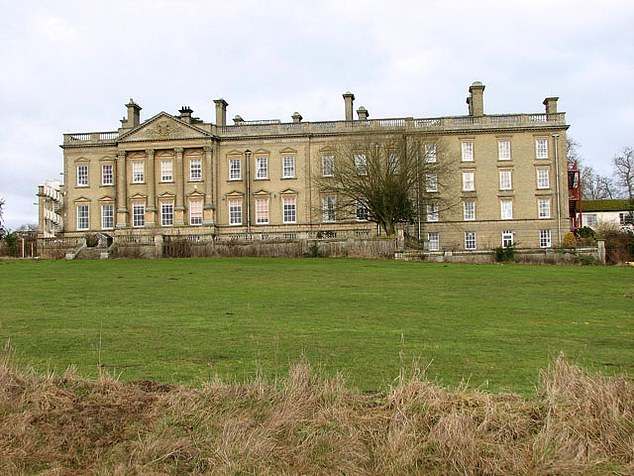 Boarding schools have reportedly seen fees fall by up to 35 per cent and day-pupil numbers by 20 per cent. Pictured, Riddlesworth Hall School

Many independent schools are facing a funding crisis because of the pandemic. Enrolments have plummeted and fees have been slashed because pupils are learning from home.

Boarding schools have reportedly seen fees fall by up to 35 per cent and day-pupil charges by 20 per cent. They and other independent schools have been unable to take full advantage of the Government’s furlough or business loan schemes because they have to stay open to support the children of key workers or those studying online.

Last year, Chinese firms bought three schools, including Abbots Bromley School near Lichfield, Staffordshire, which had been forced to close its doors in 2019. 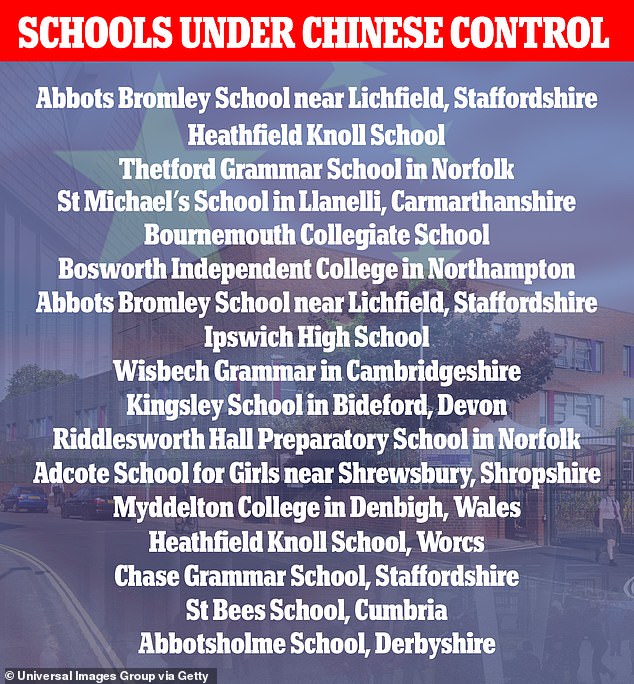 A key player in the market is Bright Scholar, which bought a number of schools and colleges in 2018 and 2019, including Bournemouth Collegiate School, St Michael’s School in Llanelli, Carmarthanshire – where Justice Secretary Robert Buckland and singer Cerys Matthews were once pupils – and Bosworth Independent College in Northampton.

Bright Scholar is owned by Yang Huiyan, who is reportedly worth £20 billion, making her Asia’s richest woman, and was founded by her father Yang Guoqiang, a member of the Communist Party’s highest- ranking advisory council.

The Wanda Group, which invests in technology, real estate, hotels and the media, bought the schools in 2017 through City of Londonbased asset manager London & Oxford Group.

It was founded by Wang Jianlin, a former People’s Liberation Army soldier who is worth an estimated £10 billion and is a member of China’s senior Communist Party advisory council.

Two more schools – Kingsley School in Bideford, Devon, and Heathfield Knoll School in Worcestershire – are owned by China First Capital Group, which has senior Communist Party members on its board.

The firm’s owner, Kong Lingtao, who claims to be a direct descendant of the Chinese philosopher Confucius, also boasts of his visit to Buckingham Palace in 2014, when he met Prince Philip.

Another company, Ray Education Group, bought Adcote School for Girls near Shrewsbury, Shropshire, and Myddelton College in Denbigh, Wales, in 2018.

On its website, Ray Education details plans to use its British schools to help expand to other countries as part of Chinese President Xi Jinping’s Belt And Road strategy to boost China’s global economic and political influence.

Under the heading ‘international market’, Ray Education says it is ‘relying on British brand schools and responding to the Belt And Road call [of the Chinese government]’ to target expansion in ‘Malaysia, United Arab Emirates, Thailand, South Africa, Nigeria and other countries’. 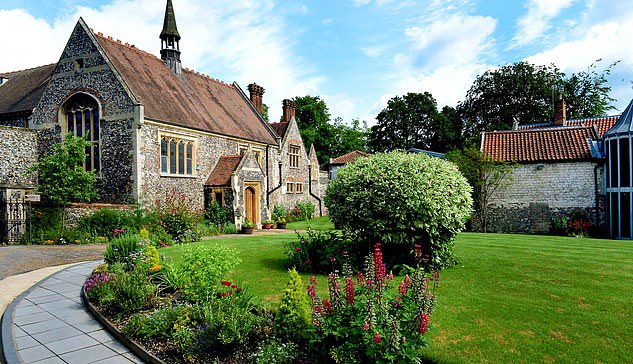 Others bought by Chinese firms include Thetford Grammar School (pictured) in Norfolk, which was attended by Thomas Paine

Ray Education’s chief executive, James Hu, who is a secretary of the Communist Party’s Hongkou district committee, said: ‘Adcote School for Girls and Myddelton College are part of our global campus plan.’

He added: ‘We have already set up three Adcote schools and two franchised Myddelton Colleges in China within two years and we have plans to bring the two brands to other regions and countries in the near future.’

Last night, Conservative MP Tom Tugendhat, chairman of the Foreign Affairs Committee, said: ‘China’s strategic understanding and reach means that they have an advantage in seeking to influence others and using established brands, including some of our own, to achieve that position.

The revelations will add to concern about the growth of Confucius Institutes at 29 British universities, and Confucius Classrooms, an offshoot, at almost 150 schools, including Wellington College in Crowthorne, Berkshire.

They claim to promote the Chinese language and culture, but critics say they are a vehicle for Beijing to spread propaganda and curtail free speech.

Foreign Secretary Dominic Raab said last month the Government is reviewing the role of Confucius Institutes, which are under scrutiny in other Western countries.

Critics point to educational resources used by Confucius classrooms as evidence of propaganda.

Another popular learning tool is Chairman’s Bao, a news service for children that includes articles about tourists enjoying trips to the region where minority Uighurs are persecuted.

Last night a Department for Education spokesman said: ‘Owners of independent schools have a requirement to promote fundamental British values.

NIGEL FARAGE: A Communist takeover of our schools that Britain must end at once

By Nigel Farage for The Mail On Sunday

The world is being taken over by stealth by the Chinese Communist Party. Under a neo-colonial project, President Xi Jinping hopes to achieve global economic domination via massive international investments.

It extends way beyond buying up mineral assets or Western telecommunication systems. There’s a cultural dimension that reeks of propaganda and indoctrination.

Not content with financing some British universities, we now learn that Chinese companies directly linked to the highest ranks of the Communist Party have serious financial interests in our schools. 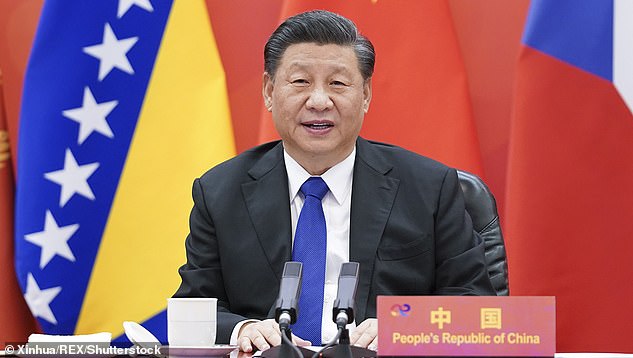 Nigel Farage: The world is being taken over by stealth by the Chinese Communist Party. Under a neo-colonial project, President Xi Jinping (pictured) hopes to achieve global economic domination via massive international investments

The Government must wake up to the dangers and act quickly.

Particularly at risk are private schools. Inflation has meant that fees have risen rapidly over the last two decades and so they have become unaffordable to all but the richest.

As a result, such schools – especially those with boarders – are reliant on Chinese students to help balance the books.

Since 2014, a network of Chinese companies has been quietly buying up struggling establishments.

Nobody knows how far this will go.

Some will shrug their shoulders and say it’s better to prop up such institutions with Chinese money than see them close. But that ignores much more important issues.

For example, three schools and a network of colleges are now owned by the Bright Scholar Group, run by Yang Huiyan, whose billionaire father is a senior member of the Chinese Communist Party. In essence, this is nothing less than a Communist takeover of part of Britain’s private education sector. 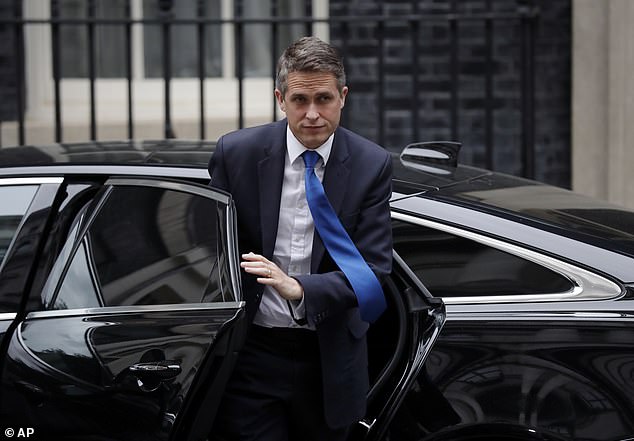 With the integrity of the education of thousands of British children at stake, Education Secretary Gavin Williamson (pictured) must address this as a matter of urgency

Meanwhile, there’s the role of the Confucius Institutes. Under the control of the Chinese government, its students are taught a grossly sanitised version of Chinese history and politics.

No mention is made of the plight of the Uighur Muslims or the eradication of democracy in Hong Kong.

It is a supreme irony that one school, Thetford Grammar in Norfolk, is now in the hands of Hong Kong-based China Financial Services Holdings.

This school is the alma mater of radical thinker Thomas Paine, author of Rights Of Man, whose beliefs helped set up the United States of America.

The fact is that our Government has been too pro-China for too long – and all because money talks.

With the integrity of the education of thousands of British children at stake, Education Secretary Gavin Williamson must address this as a matter of urgency.